Upon reading through this text I was first moved to think it did not amount to very much. A few esoteric ramblings about cat-human dynamics and several rather bizarre anecdotes relating to people I have known over the years and their cats. I was struck by the singular lack of good sense in the project. So much was I, in fact, that I was on the point of heaping the various notebooks containing the original manuscript into a pile in my fireplace when an old acquaintance and cat lover, a film-maker I have known for many years, Agnès, paid me a surprise visit.

As I say, my manuscript was ready for the match. If it hadn’t been for Agnès’s call late one summer evening, asking if she could possibly stay with me for the night because the Eurostar service was in tatters, there would be no Little Purring Heart. Distracted from my mission to destroy the hateful pages of my pipe dream, they still stood in the grate when Agnès arrived.

She noticed them immediately. She has that kind of an eye.

‘Thomas, what are you doing with those notebooks?’

I sighed. Maybe I even groaned because Agnès looked at me curiously. Like many of my friends, Laura for instance, Agnès is what we might call a ‘strong character’. She also has a deep fascination with ‘gleaning’, something she has even made a film about, and a preoccupation she has latterly indulged not only when driving through the countryside during harvest time, but wherever and whenever she sees something she likes that someone else appears to have rejected. You go to her Paris flat and you find a monument to the forgotten, overlooked and undervalued. Presiding over all of this is her cat, naturally.

‘The notebooks?’ I replied. ‘Oh …’ I was going to concoct an excuse about having nowhere else to put them while I spring-cleaned; but this was patently untrue, as the polished minimalism of my flat betrayed. It was well past the spring, and my flat was and remains neurotically tidy and clean enough to disturb most visitors.

I was in the kitchen when she asked me, and before I said any more I heard the clatter of the fire grate being moved and the flicking through of pages. I replied nonetheless. ‘Well those are for a project I have been completing these last few months …’

‘But Thomas, this is very interesting. As usual I think you have something of a loose screw, or maybe several, but that is beside the matter, surely. I find this very interesting, even though I am not quite sure what you mean.’

I returned to the front room, where she had spread the notebooks around her. Several were open, revealing the doodles and schematic diagrams I often sketch when I work. I explained my project to her.

‘And I hope you will be including the diagrams as well?’

‘Those were more for my own use. They help me think. Aren’t they rather stupid?’

‘They are, perhaps, how should I say, a little ‘Winnie-the-Pooh’, but I think they add a certain flavor. A certain something. Your project is concerned with aesthetics, and these are a big part of your own curious aesthetic.’

This is how the diagrams came to stay.

However, that is hardly a conclusion.

I could say that my enquiry into the psychology of cats as a conduit for exploring people, taking into account the unique aesthetics of synchronization, communication, playing and loving, inspired as I have now revealed by the Koto’s little purring heart, raises as many questions as it presents answers. If I think about Christopher’s idea about the internalized ‘mothering’ aesthetic, where now do I leave you, as your ‘mother’? Perhaps, Christopher, you have a rather limited grasp of what it might be to be a mother. Or maybe it is my arrogance, coupled with a rather controlling wish, which leaves me thinking at all of the text as something that might be in any way ‘nurturing’. What can I do?

I can tell you: in the spirit of my enquiry I would like to examine the nature of a conclusion in the light of a cat. Yes, in the light of a cat. And by this I do not mean a little cat standing over me with a torch; no. I mean to ask: what would happen if I permitted myself a cat by way of a conclusion? What would occur if I allowed myself this experiment rather than getting trapped in the dialectical ping pong we, as thinkers, often engage in? When one of us misses the ball, what then? Is this a victory or an unfinished game? I ask you this: what would it be to imagine no need for an answer?

I have to say that it was Agnès, during the course of our conversations in which she salvaged my manuscript and persuaded me to publish it, who suggested this – and who presented me with the her very own cat, Mo-Mo, as a means to experiment with searching after what she called ‘a different kind of truth’.

This interested me very much. It is, I believe, what ‘the Joker’ is all about. A sudden suspension of the normal rules; a hand fate deals which transforms a situation – something, in fact, which my friend Laura describes David the film director often being gripped by. Or I could think about Rickman and his multi-body psychology (quoted, in fact, Lacan in the first of his seminars): the oedipal situation is one thing; Oedipus + a cat is something quite different. Cats are change; cats are telepathy.

As a consequence of these ideas and my sharing them with Agnès, she and I reconvened in her Paris studio several days after our meeting in London, with Mo-Mo, and a variety of accouterments intended to investigate what my conclusion might be + cat (Fig 12). 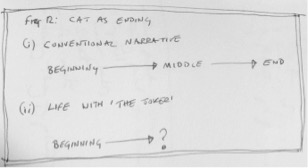 Agnès filmed the event, the sound track to which I have transcribed, and an excerpt to which I have included here, by way of an ending to this text, to let this event, the occasion of my examination of a new aesthetic approach to the psychology of cats and what this might tell us about people, play out. I would think of all that I have written so far as perhaps like music; and now we are have reached the final bars.

And as anyone involved in thinking about life like I, as a certain kind of psychotherapist, has grown accustomed to, let me remind us, or at least myself, that every experiment tells us most about the mind of the experimenter.

Can I allow myself one more thought before I proceed with the transcript? I shall. This is, after all, my own book.

What is the phenomenon of cat ownership if not a certain kind of ludicrous experiment? As I have mentioned, there can be no ownership of cats. The Reverse Principal makes it clear that cats ‘own’ people. The ‘Joker’ quality of a cat indicates why.

On this note I shall leave you to dwell on what happened when Agnès filmed me and Mo-Mo at her Paris studio, or at least in so far as the following short excerpt will allow. Agnès and I chose it not for its good sense or its explicatory qualities; not for its framing or paraphrasing of an idea, nor for its position in the narrative of what unfolded that afternoon. None of these things applied. What you are about to read was chosen because of how it felt, aesthetically. These moments, recorded here, contain a resolution that is very difficult describe: something quite other than an answer, more an opening out of the kind I have experienced when clouds have cleared, fog has lifted or dust has settled.

TT (myself) is seated at a rather roughly hewn wooden kitchen table. In front of him are three small, identical, upturned silver cups. Around the cups stalks Mo-Mo (MM), a pitch-black cat of the Parisian kind, the sort to be seen in a Steinlen poster. The cups are spaced about ten inches apart and MM glides from one to the other without hesitation. A voice, Agnès’s (A), speaks from off-scene:

A: Mo-Mo, tell us where we should go.

MM keeps stalking and then stops, dramatically, as if transfixed by a sudden noise or a sight of prey. She looks intensely at each of the cups and then treads past the one closest to her, approaching the middle cup. As she reaches it she stops again, gently places her paw on it and meows. Her meow seems somehow out of place, as if from another cat, or even a cat who is not there – watching this on film, now, I experience the meow as dubbed. I can say with certainty, however, that the meow was real.

MM withdraws her paw. TT reaches for the cup, and lifts it to reveal a folded square of paper. He places the cup the right way up ion the table, reaches for the paper, unfolds it and reads it.

TT: (reads it again) ‘This is the Joker’. Agnès, what does this mean?

TT: You wrote it.

A: I did, but I didn’t know Mo-Mo was going to choose it.

A: If she’d chosen one of the other two I’d have a thought or two.

TT: But not this one.

A: No. I simply described what was on the piece of paper. But this will only make sense if you show it to the camera.

TT shows the piece of paper to the camera. There is a drawing of ‘The Joker’ playing card: the cat variety.

TT: You drew that?

A: Yes I did. That’s why I wrote what I did underneath.

TT: Agnès, what’s the point in this?

A: I don’t know. Maybe we should think about it?

MM walks to the edge of the table and jumps out of shot.