‘Give a cat a piece of string, and a cat will play’. My friend Laura told me this not that long ago while she was arranging the blonde wig she had to wear for her part in a cult TV series directed by one the men most like a cat I have met, David. We didn’t have a cat to hand, but she was dangling a long piece of string.

I agreed. We’d been talking about how much like a cat David was, and somehow we’d ended up agreeing that, for him, a camera was his piece of string.

‘My cat at home,’ she’d said, ‘Whatever mood it’s in, you show it a piece of string and it’ll jump on it. Just like it is with David, you give him a camera and he’s on it. Any kind of camera, the more expensive, the better.’ And she dangled the string. Do you believe me?’

At that point I hadn’t agreed, and I wasn’t sure, in fact, what she meant – or where this might take us with cats. She knew I was writing a book about cat psychology, but Laura can be pretty mercenary when she gets hold of an idea; and because the whole point of me heading to an Irish pub in Los Angeles (we were actually in her trailer round the back of the pub) was to speak to Laura some more about some very interesting things she’d once told me about what happens when cats play, I didn’t particularly want to get sidetracked into talking about David and cameras.

‘Tom, you look worried.’ She took my hands and clasped them gently. ‘I know you want to talk about cats, and play, and trust me, that’s where we’re going. But do you think I’m right about David and cameras?’

‘Do you want to find out?’ She squeezed my hands and smiled. I couldn’t help myself. I agreed. And I didn’t have time to change my mind because David walked into her trailer.

‘Hello,’ he said through a megaphone he was holding. I tried not to stare. He didn’t seem to need it just to say hello; but I knew he was an unusual man. I smiled and said hello back.

Before he could say anything else Laura asked him: ‘David are you busy?’

‘Laura I am no more busy than ever. We have a scene to do, so yes we’re very busy. Are you ready, now? Are you ready? Do you remember how we said you were going to do this, how you’d turn round and look into Albert’s eyes like he was an atomic explosion, or Rimbaud. You take your pick.’ He looked intense, full of whatever he was about to film; his eyes a little glazed, like he was overcome by something – maybe the scene. It sounded as if he had something special in mind for Laura.

‘Almost David. First, though, I wondered if you’d like to see my new camera?’[1]

‘Laura, I don’t have time to look at a camera.’ His face, however, told a different story. David’s eyes shifted quickly around the room, and what he’d just said had not been said through his megaphone.

‘My God, Laura.’ David put his megaphone down. ‘Where is this camera?’

‘Over here.’ She went to her shoulder-bag, slung over the back of a chair, reached inside and took out what, to me, looked a rather small camera. She handed it to David.

He hurried from the room with the kind of urgency you seldom see unless someone is ill or in danger. Laura nodded at me and we followed him; at least, we tried to. By the time we had left her trailer all we could see was the back of David’s car careering towards the highway.

‘He’ll be gone for the rest of the day,’ said Laura. ‘Like a cat with a bird. I won’t get it back off of him until he’s finished with it.’

‘What about the film?’ I asked.

‘When it comes to cameras, I told you. He’s fickle as a cat. Sometime this tomorrow he’ll turn up back here with some prints, and he’ll look grubby, like he’s been crawling around on his belly in the dirt, because he probably has.’

I could go on, because I stayed in LA for a few days. I ended up driving across the Mojave with David and Laura to rescue Kyle, who was also a star in the TV series, and who was as keen as David on cameras. After Kyle saw a photograph David took with Laura’s camera in Death Valley he insisted on going there himself to take a companion shot of his own. Unfortunately he lost track of time and seemed to go a little mad in the heat. A message Laura received by satellite phone was most alarming.

The thing I hope you notice in my account of my time with Laura, however fanciful some elements of it may sound, is what happens when a cat, or a man like a cat begins to play. Cats know no logic in their games. They don’t play in the way I might play cricket or sometimes tennis. Cat-play is almost automatic: an acting out of desire, an apocalypse of reason and an abnegation of responsibility. To play like a cat is to play without limit.

And with this in mind I would ask you to consider, however briefly, what I have come to call the ‘Joker’ role or function that cats have in groups of cats and people. The atmosphere a cat engenders when it plays is like one where a sudden typhoon might break out at any moment. People used to speak, less so now, of the ‘Bermuda Triangle’, an area of sea near Bermuda where aeroplanes and ships mysteriously disappeared. Supernatural reasons aside, there is much evidence that the weather systems in that part of the world mimic a human-cat grouping with the cat’s ‘Joker’ function operating similarly to the way in which a sudden shift of a weather front might swallow up an aircraft carrier or a jumbo jet without warning.

The ‘Joker’ function adds something ‘other’ to what John Rickman (xxxx) talked about as multi-body psychologies (‘two-body’, ‘three-body’ as in the oedipal relationship), of groups as collections of individuals. Wilfred Bion saw groups as something in themselves, rather than gatherings of people in various configurations. In either case, the psychologies of Rickman or Bion, the ‘Joker’ supplies an unknowable, volatile element as likely to end in tears as happiness.

What does this mean to us, as humans? I would suggest that the presence of a cat in any social group, in addition to the functions I have already suggested, presents us with a possibility for change. Cats are change (Fig 9), we could say, as equally as we might say cats are telepathy. 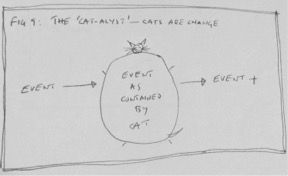 Where does cats as change take us?

I am reminded of the paper I delivered at the 2013 UKCP annual research conference[2]. I admit that my initial premise, that the only valid form of psychotherapy research involves exploring transference, was contentious, but the boos which greeted my conclusion were hardly what I expected from even the worried looking individuals who’d done their best to ignore me since the start of the day. May I quote here, together with an exchange I had with a member of the audience, from my paper:

T: And if I remind you of our cat, the cat of my dream of eternal research, swimming the muddy channels of that once beautiful but now rendered deadly brown, I am minded to ask ‘where does the cat take us?’

Bearded Man in Crowd (B): This is shit mate.

T: Indeed it is. From the acidic coffee served to us at 9.00 this morning, through the nasty croissants to the full stop I am about to deliver right now. The cat takes us, as it swims, to think of nothing less than the calamity which will overtake us if we succumb to a culture of research as prescribed by those forces we have today made so little attempt to describe, cowed as we are, super-egoically whipped into line. Ladies and gentlemen, here we are.

B: Check your privilege, for Christ’s sake.

T: Sir, I have and I continue to do so. Can I suggest you check out your counter-transference in relation to all I have done my best to bring here, to you all, today. Or, as I will at some point go on to say: if you desire change, invest in a cat. If you would like things to stay as they are, get a dog and it will guard them.

With this, I left.

As you might sense from what I have told you, the day was bruising. My subsequent near-expulsion from the UKCP, also, was a tawdry affair; and I wonder if without an intervention from a certain Kleinian analyst, who pointed out the connection between the contents of my paper and my imminent ‘expulsion’, and UKCP’s reluctant climb-down, I might now be unaccredited. Once again, can I thank that analyst who, like most Kleinians, for better or for worse, found it so hard to say nothing.

I hope I have done justice here to the aesthetics of cat-play as they engender change.

[1] Perhaps at this point I should draw attention to the special kind of ‘atmosphere’ Laura was kindling. You may remember how my thinking rests on an appreciation of ‘atmospheres’ (and I shall say more in my conclusion)? Laura was building an atmosphere par excellence.

[2] So We All Want Faeces? Psychotherapy Research as a Profane Regression, 2013.